The Sports Video Group is pleased to announce that Jim Nachtman, Assistant Athletic Director, Media and Video Production at Penn State University will be honored with the 2016 SVG College Sports Summit Pioneer Award. 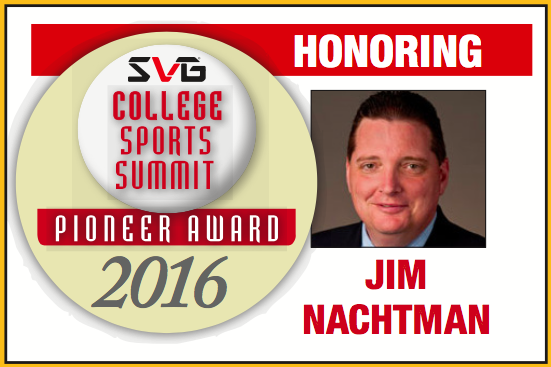 Nachtman will be celebrated at this year’s SVG College Sports Summit at the Omni Hotel at CNN Center in Atlanta on June 2.

A lifelong Nittany Lion, Nachtman graduated from Penn State in 1990 with a Telecommunications degree and spent a decade (1989-1999) serving as Technical Director of Penn State Public Broadcasting before joining the Penn State Department of Athletics in 1999 as Director of Broadcast Operations. In March 2015, he was elevated to Assistant Athletic Director of Media and Video Production.

“Jim is technically brilliant and incredibly innovative,” says Brandon Costa, Director of SVG College. “The industry has changed so dramatically in the past two decades and Jim – always with his finger on the pulse – has kept Penn State, the Big Ten Conference, and friends in the college video community ahead of the curve. It’s that willingness to share ideas and best practices with the industry that makes him such a fitting choice for this honor.”

Nachtman played a pivotal role in the conference-wide adoption of the Big Ten Network prior to its launch in August of 2007. He also was instrumental in the technological infrastructure within the Pegula Ice Arena, the university’s state-of-the-art ice hockey facility that opened its doors in October of 2013. In addition, he helped oversee the installation of a new 152-ft.-by-37-ft. video board at Beaver Stadium in 2014 – which currently ranks as the seventh largest video board in college football.

“Over the years Jim has made the Nittany Lions video program one of the best in the nation,” says Ken Kerschbaumer, Executive Director, Editorial Services at Sports Video Group. “But his leadership has extended beyond the borders of Happy Valley and made a difference on the college video market from coast to coast.”

Nachtman, who has been an active member of the Sports Video Group and the SVG College Advisory Committee since their inceptions, lives in State College, Pa. with his wife, Tina, and three children, Sarah, Katie, and Robert.