The Sports Video Group is pleased to announce that John Kvatek, assistant athletics director for video and creative, University of Central Florida, will be honored with the 2015 SVG College Sports Summit Pioneer Award. He will receive the award on May 28 at this year’s Summit at the Omni Hotel at CNN Center in Atlanta.

A 27-year veteran of the business, Kvatek has established himself as one of the foremost leaders in college sports-video production, evolving with the industry as it has grown from coaches video to in-venue videoboard entertainment to live event streaming. He has turned the UCF video-production team into one of the top departments in the country and is an active member of the college-sports-video–production industry, sharing his expertise with colleagues across the country through such organizations as Sports Video Group and the College Sports Video Association (CSVA).

“When I received the call about the Pioneer Award, I was literally speechless, which isn’t normal for me,” says Kvatek. “This type of recognition by an organization that I think of so highly and from people whom I hold in such high regard is tremendous. When you’re in the middle of all of it every day, you’re just trying to do the work and live up to the rest of the industry. To be told you’ve done it well by your peers is humbling and something you aspire to and appreciate for the rest of your life.” 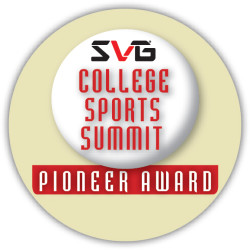 In his 12 years at UCF, Kvatek has overseen unprecedented growth in the university’s Video Services Department. Along with producing all coaches video, his team has assumed responsibility for producing all videoboard content, coaches shows, television ads, and live-event Web-streaming. The department has grown from full-time employee (Kvatek) to seven full-time team members, as well as more than a dozen students serving in various capacities. UCFAA Video Services produces three regular TV shows that air locally and regionally.

“John is one of those special individuals who have not only seen this industry through the past two decades of development but have pushed it to new heights by hard work and commitment,” says Brandon Costa, program director, SVG College Sports Summit. “It is the honor of SVG to bestow this recognition on John on behalf of his peers, friends, and those who look up to what he has accomplished.”

When UCF began building Bright House Networks Stadium, a 45,000-seat football stadium, in 2006, Kvatek was charged with working with the principle A/V consultant and the design-build contractors to design and commission all the broadcast accommodations and their prewiring, as well as in-game production systems and the in-house CATV systems. BHNS opened on Sept. 14, 2007, to a packed house when the Knights faced the Texas Longhorns on national television.

“What’s amazing about John is not only his ability to focus on doing things right today but also his understanding of the big picture and how best to get ready for tomorrow,” says Ken Kerschbaumer, co-executive director, editorial services, SVG. “Couple that with leadership abilities that focus on empowering others and a desire to help lift the skill sets of everyone he comes into contact with, and it is easy to see why John is a perfect choice for the Pioneer Award.”

Prior to his arrival at UCF, Kvatek worked at Pinnacle Systems from 1999 to 2004, serving in various capacities, including product marketing manager for Networked News and Sports Editing Solutions, managing  development of a suite of more than 50 software components and hardware platforms. His work with VorteX News served such clients as CNN, NY1, a collection of Time-Warner Cable News Stations in markets around the country, TV Azteca and Televisa in Mexico, and Networked News Service in New York.

Kvatek was even innovating in his role as the athletic video services coordinator at the University of Wisconsin-Madison from 1995 to ’99. He was responsible for development and utilization of the world’s first digital video network for sports-video analysis and editing. He was also a member of the Kohl Center Design Team, designing all of the broadcast accommodations, including a comprehensive broadcast prewire plant.

Kvatek is a member of the Sports Video Group Advisory Board and serves on the SVG College Advisory Committee.